I love going to the theatre, I was honoured when I was asked to review The Everyman Theatre of Cheltenham production of Will Harvey’s War.

If you managed to see it, I hope you enjoyed it

F.W. Harvey was born in Gloucestershire in 1888 and is one of the most popular UK war poets, writing powerful poems through his own experiences of the Great War. The Everyman Theatre have been given exclusive access to an unpublished novel by Harvey called Will Harvey’s War to mark 100 years since the start of World War 1.

The Everyman Theatre on Regent Street Cheltenham presented their own production of Will Harvey’s War at the beginning of August, with four of the theatres professional actors & actresses and in addition the help of local volunteer actors and sponsors. Magically they created the romantic story of Gloucestershire and the battle of the Somme. After a year in the planning, this performance was ready to be the official launch of Gloucestershire Remembers World War 1.

Amazingly this romantic story of survival and escape was absolutely brilliantly adapted for the stage. It showcases the deep adjournments of Harvey’s mind, and the dark places he observed and experienced. Paul Milton the director wanted to create an exploration story from the unpublished works instead of a memoir of Harvey’s experiences. However Milton has kept the truth in the story, such as his brothers loss of life during the war and the capturing by the Germans to the Prison Camp, you are able to comprehend life in this time. The fictional part of the production is the romance with a gypsy girl. 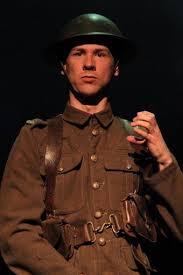 The play starts with Will has a young boy, growing up in Gloucestershire and attempting poetry. Forward a few years later were Will is now a solicitor in a town far from home and up North, gloomy and unlike the characters dream. War is then declared and Will and his brother Eric are called up. However the story then focuses on the love story between Will and a gypsy girl who he had met years before when home in Gloucestershire. She has disguised herself as a man and joined the army unbeknown joining him on the front. Their journey of escape is gripping the edge of your seat journey across the borders, finally they are free and homeward bound for the romance to final come to the end.

The performance contained elegant dancing and music that packed a punch at the moments most powerful. The Everyman’s Community Choirs joined the Cheltenham Silver Band to craft music such as Holst’s Mars to Pack Up Your Troubles. 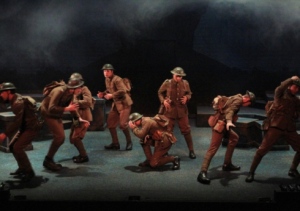 Will Harvey’s War will be undertaking creative residences in Primary Schools across Gloucestershire over 10 weeks in the autumn. The Everyman should be proud of this wonderful performance.